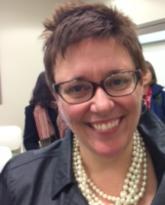 Research interests include French Immersion and Second Language pedagogy and the implementation of the Neurolinguistic Approach in the Intensive French program, as well as the experiences of pre-service teachers.