Chancellor Deborah Yedlin and President and Vice-Chancellor Ed McCauley are pleased to announce the honorary degree and Order of the University of Calgary recipients for the November convocation ceremonies.

Honorary degree recipient, Sheilah L. Martin
Justice Sheilah Martin is a judge on the Supreme Court of Canada and former dean of the University of Calgary’s Faculty of Law.  Her professional accomplishments as a judge, lawyer, author, professor and researcher point to an intellectual range and scholarly curiosity without boundaries. Martin has acted as a legal representative or presided as a judge over precedent-setting cases in Canadian criminal and constitutional law. Widely respected within the Canadian legal community, Martin has used her platform to mentor Indigenous law students, support human rights and uphold the highest standards of legal ethics. After serving on the Court of Queen’s Bench of Alberta and the Courts of Appeal of Alberta, the Northwest Territories and Nunavut, she was appointed to the Supreme Court of Canada in 2017.

Order of the University of Calgary recipient, Douglas W. Morck
UCalgary alumnus Douglas W. Morck, BSc ’83, PhD ’91, is a professor, researcher, veterinarian, and animal welfare advocate. As the head veterinarian at the university, Morck oversees animal care standards, conducts his own research on bacterial biofilms and antibiotic resistance, teaches in the veterinary medicine program, mentors graduate students and serves on all animal welfare and ethics committees on our campuses. He has contributed his expertise toward the Alberta Animal Protection Act and he has been recognized by the Canadian Council on Animal Care as a national leader in animal well-being.

Honorary degree recipient, Dawn Lorraine Farrell
UCalgary alumna Dawn Farrell, BComm ’83, MA ’85, is a Canadian energy leader with over three decades of impeccable credentials in strategic planning and commercial operations. She currently serves as the president and chief executive officer of TransAlta Corporation, and as a director on the boards of the Business Council of Canada and the Conference Board of Canada. Farrell also dedicates a significant portion of her time to supporting other female leaders, including serving as member of the Canada-U.S. Council for the Advancement of Women. She has also lent her support to community non-profits, such as Momentum and the United Way of Calgary, which provide supports to the most vulnerable groups in Calgary.

Order of the University of Calgary recipient, Mavis Ann Clark
UCalgary alumna and former university senator Mavis Ann Clark, BEd, MEd, CHRP, is a passionate educator, committed volunteer and motivated advocate for lung cancer research. Clark held a variety of positions with the Calgary Board of Education from teacher to superintendent. She has served on a number of community boards focusing on women and families. Recently she has become a spirited champion for lung cancer patients. Her focus is to reduce the stigma surrounding lung cancer and to increase the funding available for early detection programs and research supporting innovative treatment options that will improve patient outcomes. Her advocacy efforts are paying off, in the form of the Paul Clark Lung Cancer Fellowship, the Lung Cancer Translational Research Initiative, and the Alberta Lung Cancer Consensus Forum.

About the awards
The honorary degree is the University of Calgary’s highest academic distinction and is bestowed upon individuals whose notable achievements and community service merit recognition. These distinguished recipients address our graduating class at the convocation ceremonies, sharing words of wisdom they have gained through years of excellence and leadership in their fields.

The Order of the University of Calgary honours recipients who have a record of exemplary and distinguished service to the university. The nominees can be current or past members of the university community.

Nominations for honorary degree and Order of the University of Calgary recipients are open year-round. Nomination forms and other important information are available on the Office of the Chancellor and Senate website. 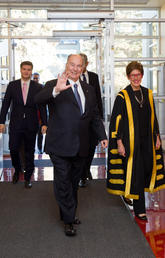