TAB Incoming: On the Road with TAB Students from Japan and China

Lisa Fedorak is a PhD student at WSE who had the pleasure of spending time with our TAB (Teaching Across Borders) students from China and Japan. She went on the road with them across the city of Calgary during their stay here.

During February and March, the Werklund School of Education welcomed two groups of education students from Shaanxi Normal University (China) and Hokkaido University of Education (Japan) who were participating in the Teaching Across Borders (TAB) Program. One component of the program involved observation and interaction with Canadian students and teachers in a variety of CBE schools. As a chaperone for the TAB students I was able to engage in dialogue during and after school visits to acknowledge the experiences from the TAB student’s perspectives.

With national school systems in China and Japan, the TAB students were surprised that Canadian provinces are independently responsible for their own school systems and curriculums. Another practice of great curiosity was split-grade elementary classrooms. This was a new concept the TAB students were unaware of prior to visiting Calgary classrooms. Many questions arose about assessment within these split-grades, which lead to a deeper discussion about formative assessment and qualitative measures of success. The TAB students were again fascinated with these approaches to measurement as grading through quantitative examinations seemed to be the norm in Chinese and Japanese classrooms.

The diversity of options in Canadian high schools was another surprise to the TAB students. In China and Japan, a strict focus on core subjects like science and math are seen as most important for students to succeed in since examinations within the core subjects enable students to then qualify to take university entrance exams. The TAB students toured high schools in Calgary that offered courses in areas such as dance, music, drama, industrial arts, languages, automotive, and culinary arts. They were thoroughly amazed by the amount of choices Canadian high school students have while completing their secondary education.

Another component of the TAB program included cultural visits to numerous destinations within and outside of Calgary. The Rocky Mountains were a highlight for many of the TAB students since, for most, it was their first time abroad seeing diverse geography. The enormity of the mountains and the crisp, clean air was refreshing as was the sight and feel of snow for some who had never experienced it before!

Arriving from large metropolitan cities with high population densities, the students claimed that the vast openness of Calgary and the surrounding area was welcoming and comforting. “Everyone smiles and they give you directions…and the bus drivers say ‘hello’,” was one comment when I asked the students about their significant moments in Calgary. “The commitment to recycling” was another remark, including the system of waste collection and “so many bins to separate it!” Poutine was a food experience that many students recalled seeking out as they read it was very “Canadien.” Upon reflection, the TAB students thoroughly enjoyed their time in Calgary. The holistic experience of the TAB Program was the foundation for which the students began developing an appreciation and awareness for global understanding. 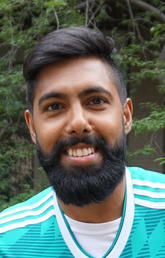 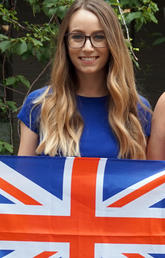 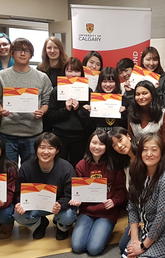